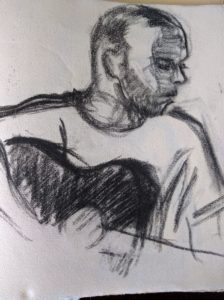 Spotted this the other night as I was flicking through one of my dad’s final sketchbooks. To me this sketch is a haiku that folds a whole universe into it. This was the last time he drew me and it is a great snapshot of a fond moment. Drawn on a sweltering humid day in the apartment I was subletting in Brooklyn. The air conditioner was broken, so we cracked open some ice cold Red Stripe beers we picked up at the Jamaican corner store. He sketched with charcoals while I played Bob Dylan songs badly. His hand starting to tremor already, but his eye still keen, and the lines still quite certain. By the next summer when he came to visit me, he was unable to draw any more due to his illness and he filled his days going to the Met and the MoMA to marvel at the masters instead. Happy times.