I have mentioned the podcast Reply All on here before, and I’ve bored many a friend about its brilliance. In short, its my favourite podcast, and the latest episode might just be their best ever. It has all the hallmarks of their great storytelling, with a unique perspective on the oddities of life in the age of the internet, and, best of all, it has a proper little mystery at its core. Rarely have I been so swept along in a story, and I wont spoil it for you, but like all good tales, the ending is terrific. Anyway, have a listen, it will bring you joy. And don’t just take it from me, The Guardian reckons it might be the best podcast episode ever. Like, ever, of all podcasts.

Have been on a bit of a kick trying out new podcasts and tv shows, as well as revisiting some old faves. Here are some of the best I’ve been watching, listening to, and reading of late.

Many moons ago, when I was gigging more frequently and reciting poems and performing sketches, I was lucky enough to be part of a regular night called the Monthly General Meeting, which was a showcase for the most inventive and willdy wonderful creative minds in Ireland. On one of the particular shows, I was on the bill with soon-to-be global musical phenomenon Hozier, as well as Arthur Mathews, the co-writer of Father Ted (possibly the greatest sitcom ever). I recall the gig itself was in the unusual and interesting surroundings of a newly refurbished Georgian building in Merrion Square (it has since become an office building of some sort) For a while Shane (Diet of Worms) and Nial (delorentos) who ran the night, produced a terrific series of podcasts entitled The Weekly General Meeting focused on creativity, and I featured on the debut episode. Take a listen to the episode and I urge you to listen to the entire back catalogue, every one of them a snapshot of a golden age in Irish creativity, amiably hosted and curated by two great artists.

Listen to the episode here

I’m always on the lookout for inspiring stuff that looks at the creative process and delves into it with creative people. One of my current favourite obsessions is the brilliant Meet Your Maker podcast, where the amiable host Liam Geraghty interviews a slew of fascinating, creative people across multiple disciplines (puppetry, comics, special FX) and hears about how they have found their chosen craft, and the many ways they approach it. The episodes are short and sweet (ca. 15 mins) and the seasons are just a handful of episodes so you’ll blaze through them. The production quality is very high (radio broadcast level) and the topics are always really intriguing. Have a listen and pass it on. One of the very best out there. 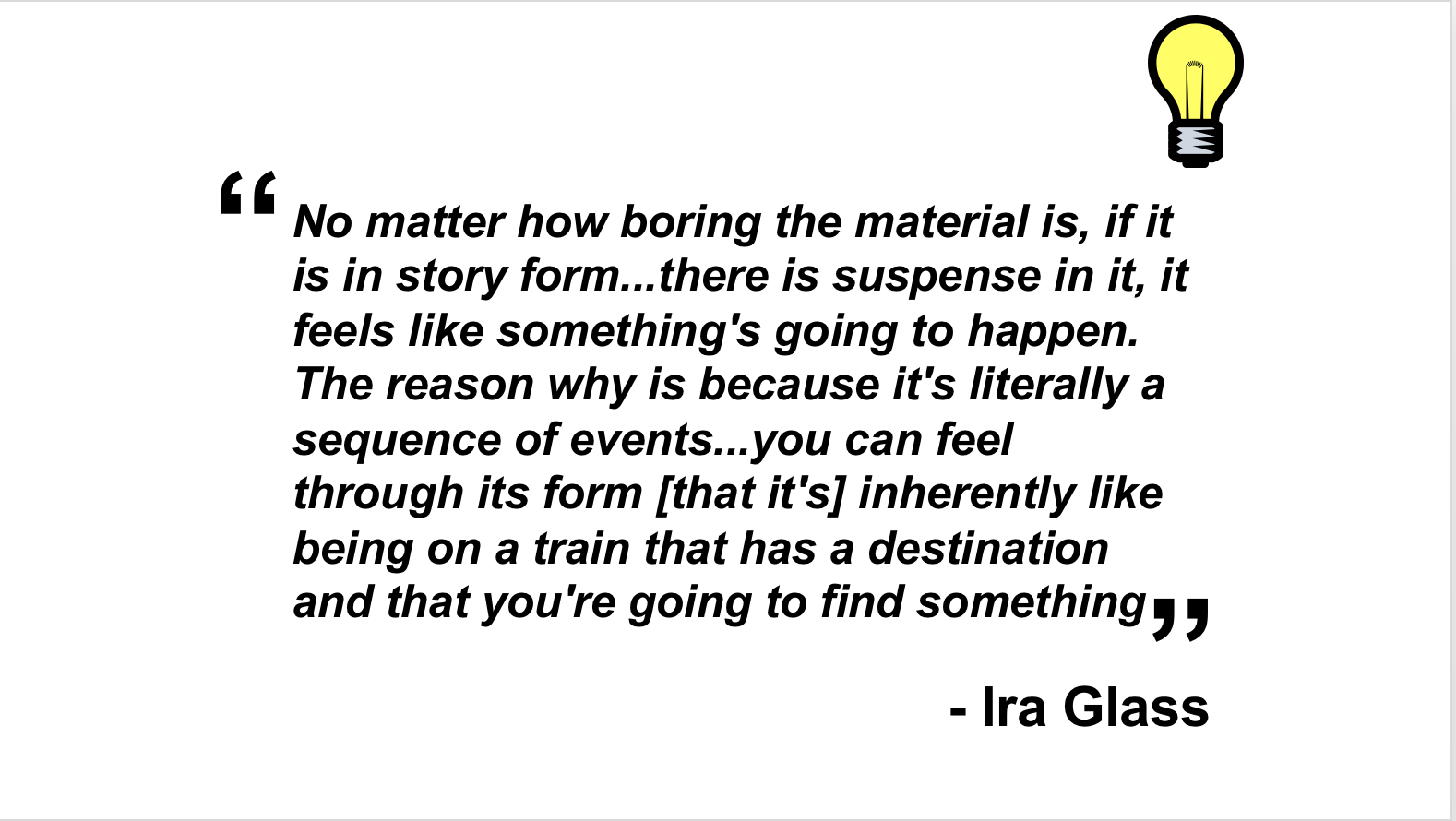 So much of the creative process is about crafting a good story that resonates and reverberates with your audience. The art of storytelling is something we have been raised with since we were kids – almost every one of us had someone who read to us at night before we went to sleep – and when it is done well, there is nothing quite as spellbinding. And that sits deep within us.

The quote above is from Ira Glass, host of the highly regarded podcast and National Public Radio show This American Life, which chronicles stories large and small from all walks of life. Of the many radio shows and podcasts out there, This American Life is perhaps among the greatest at weaving a tale that draws you in. Ira’s quote really sticks with me, because the simplicity of what he is saying is also absolutely true.

And I think it applies not just to writing, but can equally be applied to other creative forms where the narrative is placed at the heart of it, and draws the audience in, and takes them on that train.

The quote actually comes from a longer extended interview with Ira Glass ,where he goes deeper on the art of good storytelling, and I strongly recommend listening to it below. It’s full of nuggets on storytelling and the creative process.

I adore the podcast format and I’m an avid fan of all audio longform storytelling. I’ll do a post at another time about some of my favourite podcasts, but this post is about the brief spell where I produced a podcast of my own. It was motivated by two creative impulses. Firstly I wanted to test the waters of hosting and interviewing in this type of creative format – I have facilitated and MCd plenty of live shows in my time, but its such a very different skill and discipline to interview artfully in this longer audio format, so a really great thing to sharpen the skills on. And secondly I wanted to showcase some of the world class musicians and writers that had treaded the stage at the brownbread mixtape.

The format for the first chunk of episodes was always the same. Invite a great musician or poet along to talk about their creative process, a bit of their life story, and then have them select some favourite clips from the brownbread mixtape down the years, as well as perform an in-studio session featuring an original and a cover. And what a series of gems we managed to record. They are all embedded in the YouTube player above and I urge you to give them all a listen, with episodes featuring Pearse McGloughlin, EleventyFour, Colm Keegan, Justin Grounds, Fergus Costello and Lindsey Ryan

Now that time has passed I can see a few things I would do differently. I would certainly be more judicious in editing down the episodes so that they zip along a little bit. Perhaps I was too enamoured with keeping everything in, rather than making it a snappier show each time that might appeal to a wider audience. It would have been something that a slightly objective producer would have been able to spot right away. I’d also nudge myself to be quiet more often and just let the interviewee speak. Far too often in the earliest episodes I felt the need to say “yeah” or “mmm hmm”, when silence would have served the whole experience better. But I did learn from that and the later episodes were better. There is loads to love about them. I really dig the intro music / title sequence that Enda Roche cut together. And we managed to capture some absolutely stunning in-studio songs, especially some of the cover versions (Pearse McGloughlin and Lindsey Ryan are real standouts)

The latter chunk of podcasts veered away from that original format primarily because I simply didnt have time to record and produce the show any more. And then an artist I was acquainted with, Eamonn McLoughlin, had produced a documentary radio series for a local station in Ireland, and he had nowhere to house or archive the episodes. Given that many of the episodes covered artists and writers who had performed at the brownbread mixtape, it felt fitting to put them out under our banner. Some of the interviews are really interesting with top drawer Irish writers, and I even make an appearance on one of them chatting about the brownbread mixtape.

I would love to return to the podcast format and have a few ideas bubbling away, so watch this space. In the meantime, have a listen and let me know what you think.

Back in 2014, the poet Dave Lordan, was serving as guest editor for Penduline Press – a publication from Oregon in the United States. He commissioned a special audio broadcast from me to showcase some of the very best contemporary performance poets in Ireland. I had never really tried something like it before but I was really excited about trying to piece something that was representative of the many great voices in Ireland at the time, as well as making it an audio piece that was enjoyable to listen to, maybe even informative, and maintain a good energy and rhythm to it, so it actually flowed like a proper album. There was also something nice about taking the time to go back through the archives of the endless hours of audio from all of the many poets at the brownbread mixtape shows, and handpicking some of the standout moments. (I was even cheeky enough to put one of my own poems in there from the Fringe show “Three Men Talking About Things They Kinda Know About”. More on that show and the unique creative process of writing a show collaboratively in this post.) The curation process was really hard and ended up being super subjective of course (but isn’t all curated content?) and I decided to not script my interludes, but instead to speak from the heart about how these poets and their work had connected with me. That conversational tone felt right for the piece and it flowed relatively well. Then once I found the haunting simple piano piece by Irish musician Elder Roche, it all seemed to click into place. The end result was something I am really proud of and I totally stand over today. I actually think it serves as a nice snapshot of the variety of spoken word in the country at that time. And it is a proper document now. Many of the poets have deservedly gone on to greater success as performers and published writers, which is so brilliant to see. They are listed below. Seek them out, they are all legends.

Here’s what Dave Lordan said about the documentary at the time:

“[the brownbread mixtape] is a very professionally run cabaret and it has featured many of the most engaging and entertaining live arts practitioners in the country. Kalle is an excellent host and curator, a fact proven by the popularity of the monthly event. Everybody wants a gig at The Brownbread Mixtape. [ … ] Kalle probably has the closest to an overview of performance poetry in Ireland and he was the obvious choice to make a showcase selection for Penduline.” – Dave Lordan, Guest Editor, Penduline

Here is a list of the poets in order of appearance:

1. Stephen James Smith – “The Gardener”
2. John Cummins – “Brink”
3. Abby Oliveira – “the television”
4. Karl Parkinson – “The Positivity Manifesto”
5. Raven – “High John”
6. Erin Fornoff – “Hymn to the Reckless”
7. Brian Conaghan – “Waiting for the penny to drop”
8. Colm Keegan – “Ireland Is”
9. Fergus Costello – “Extract from a letter to the fella that used to be married to my sister”
10. Kalle Ryan – Excerpt from “Three Men Talking About Things They Kinda Know About”

Here is the original link to the publication in Penduline Press: